Lauren Gordon and Shannon McGregor the youngsters of the Aberdeen Premier Team returned to league duties against Hibs on Sunday after a double header  against the Republic of Ireland  in Edinburgh.

Both players played vital roles in the 3 0 win on the Wednesday night. The Republic of Ireland changed tactics for the return game and beat the young Scots 1 0.

lauren and Shannon have been selected to attend another Scotland u17 camp in Glasgow on September 16th to the 18th. Should they be selected they will head to Kazakhstan in October for the Euro qualifiers. 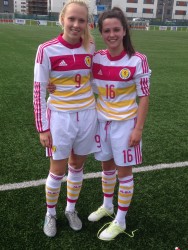